If you were to ask Michael Gaunt about fibre, internet speed and connectivity, he would be able to give you the best advice. After all, this former Telecom manager worked on both the Ultra Fast Broadband (fibre) and Rural Broadband projects with Telecom and Vodafone. He is now part of that rural community, to focus on a better quality of life.

So, he and his family chose bees. Or was it the other way around? He still asks himself this question today. Wag Tail Bees produces craft natural Mānuka honey in the winterless North. Their business is growing from strength to strength largely due to their passion and commitment, and the fact that this natural product represents the best of New Zealand worldwide. At the core of their business, like most, is the communications infrastructure. 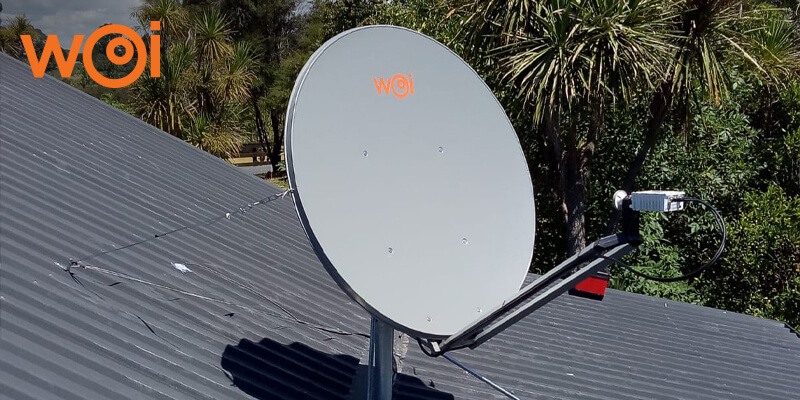 All Wag Tail Bees systems – from accounting to sales and marketing, email and document storage – require a stable, fast and unlimited internet service. However, operating the business efficiently was proving to be a nightmare.

“Right up till January our internet was unworkable. We basically couldn’t have three people online at the same time, and even two was an issue when working with larger files,” Gaunt said. “We needed to turn off computers and any devices we were not using to ensure there was no unexpected internet activity. It was a relatively common cry: ‘can everyone else get off the internet as I can’t connect?’

“We often gave up on video calls as we would have to keep hanging up and trying again.”

Gaunt says he had to do something about it.

“No terrestrial service provider could help, so I had to turn to satellite and I’m glad I did,” he said. “I sent an online enquiry to three companies one evening and had signed up with Woi before one of them had even called me back.”

He says Woi’s speed is as fast as any satellite provider and there are no caps on data and speed.

“As far as I could tell, Woi was the only provider with both fast speeds and unlimited data. Woi also seems to really want our business with a fast contact time from our enquiries to answering all our questions, and installation within five days of first contact,” he said.

“Not having a reliable internet is also expensive, and for us and our business it was more than the increase in price for satellite (connection).

He says they were paying for an unreliable service, which is never great.

“We would also spend hours trying to do work that now takes us a normal amount of time,” he said.

“Uploading relatively small video files would take 4-5 hours and then we would often get an error message. This meant we had to drive to town where fast mobile is available and use that.”

“It’s now unlimited, fast and a lot cheaper than it once was. If the terrestrial services like fibre and mobile would work for you then they would obviously be the best choice as they are cheaper,” he said.

“If you can’t then satellite is the only solution for you, and it’s a very good solution these days.”