Holidaymakers often talk of wanting to get away from it all, but they don’t always entirely mean it. Deprive them of connectivity, and a remote getaway from the city can quickly start to feel cut off and isolated. People will sleep in sleeping bags. They’ll share showers and cooking facilities. They will happily go without TV. But they don’t like to have no internet.


During peak holiday periods the park can host up to seven hundred people at once, stretching infrastructure to capacity and reducing internet speeds to a frustrating crawl. That blights the mood for people who need to keep in contact with their workplaces or who want to share their fishing and diving experiences with friends and family.


Up until recently, the park wasn’t able to offer WiFi to its guests. Park management and guests had to use limited 4G data to connect to the internet and, during peak periods, connections were spotty and would frequently drop out.


“The service from our former provider was shockingly slow,” park manager Leah Bowsher who, with her family, manages the park, its shop, cabins, campervan sites and shared facilities, said.


“That’s a problem, because WiFi is a must-have for operations like ours, especially during our busy times like Easter and Christmas. We needed something more reliable.”


After researching her options, Leah chose Woi satellite internet, and Woi now provides enough fast broadband for both the office and guests to enjoy good WiFi service – at the same time. 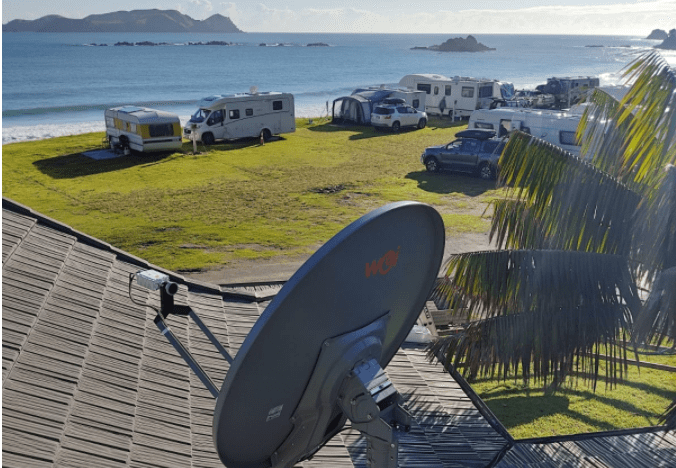 Woi’s voucher-based WiFi solution allows Leah to hand out 100MB vouchers free to first-time guests and then issue pre-paid vouchers for capped plans of up to 2GB. Each voucher has an 8MBps allocation.


“That’s more than enough for email and even fast enough for streaming on platforms such as YouTube, TikTok, WhatsApp and for video sharing and video calls,” Woi’s Richard Broadbridge said.


“And we’ve configured a softphone application to work on Leah’s smartphone and two wireless handsets to work anywhere in the park."
This was done by implementing a cloud PABX, which means all the park’s phone calls are now conducted via the satellite service, with a messaging system that connects into the park’s email server. Woi also provides auto failover to allow for two providers, as well as a managed firewall solution and a hotspot servicer, with a revenue share opportunity for the park.


“We would definitely recommend Woi satellite internet to other rural or off-grid properties or to properties that have 4G but are looking for a secondary provider,” Leah said.